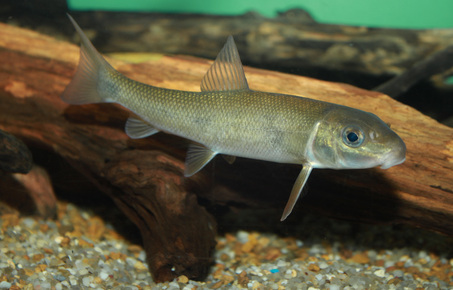 Identifying Characteristics
As its name suggests, the white sucker is distinguished by its protuberant and downward-pointing sucker-like mouth. The mouth, located on the underside of a blunt, rounded snout, has thick lips covered with small fleshy bumps called papillae. The body of the white sucker is torpedo-shaped and cylindrical, with relatively large scales. 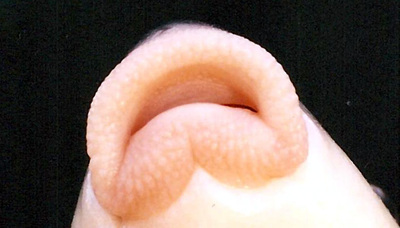 The sucker-like mouth of a white sucker, covered with papillae.

Young white suckers have three dark spots on their sides. 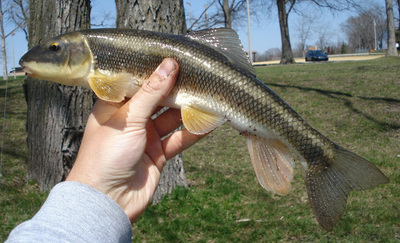 Spawning males have tubercles and dark intense bands along the sides of their body.
Habitat
The white sucker can adapt to a wide range of environmental conditions and habitats including streams, lakes, and rivers but it tends to live in small/medium sized rivers and small creeks with cold, clear water. White suckers avoid rapid currents. They often move into tributary streams to spawn and tend to do so over gravel or rocky shoals. White suckers have been found to be highly tolerant of polluted, murky, and anoxic waters.

Life History
From late April to early June (or more specifically, when the water temperature is warm enough), white suckers home upstream to rocky/gravely spawning areas with quick running water. Once there, the female settles to the bottom and is soon crowded by males. Once two males find a place on either side of the female, the three fish begin to rapidly vibrate together, causing sperm and eggs to release. Once this quick spawning act is complete, the female continues upstream to find more mates. Over the course of an hour or more, a female may lay from 20,000 to over 100,000 eggs. No nests are built for the eggs—instead, they are scattered and eventually attach to the bottom.

After a week or two, the adults leave the spawning grounds and return to where they originally came from. As for the eggs—after incubating for a week or two, the larvae hatch. The fry remain in the gravel for another one or two weeks and then migrate downstream.

White suckers reach maturity in 3 to 8 years and then spawn annually throughout the rest of their lives. This species has a maximum life expectancy of about 17 years.

Diet
At first, fry do not feed on the bottom but instead, they feed on plankton at the surface of the water because their mouth is situated at the end of their snout. Once they grow big enough, the mouth shifts to the underside of the head and they turn into true bottom-feeders. Adults feed primarily on zooplankton and benthic invertebrates. They suck up their food and swallow it because they have no teeth.

White suckers have a large variety of known predators. Its predators include muskellunges, bass, burbot, brook trout, and sea lamprey. Walleye and northern pike prey upon eggs and small white suckers. Bald eagles, herons, loons, and ospreys are known to prey on small white suckers as well. Other animals, such as bears, feed on white suckers during their spawning periods.
Conservation Status
White suckers are a very common and robust species with very large population sizes over a wide distribution. Therefore, the white sucker has been designated as a species of least concern on the IUCN Red List.
Fun Facts