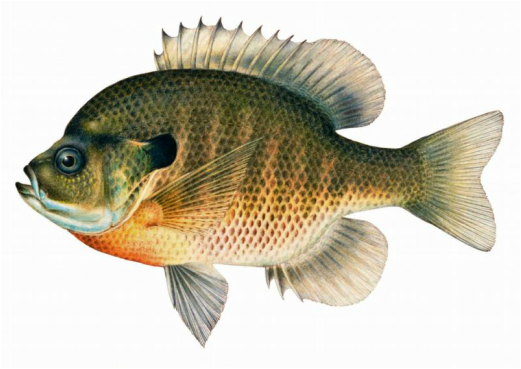 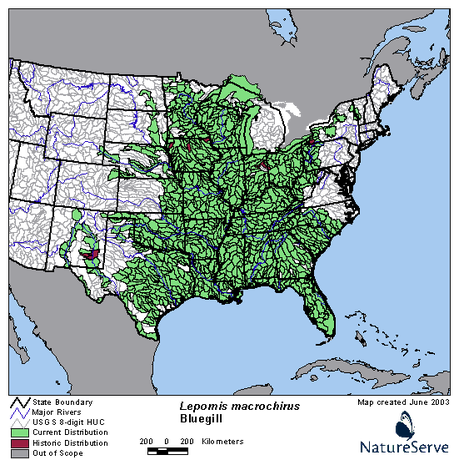 Geographic Range
Bluegill are native to Eastern and Central North America, including the lower Great Lakes. They live in streams, rivers, lakes, and ponds; and favor warmer waters that range from 64° to 70° F. These fish prefer places with plenty of cover such as weed beds, submerged logs, or drop-offs. They stay in relatively shallow water but as temperatures rise in the summer, large bluegills will head for deeper water. They tend to be found in schools with other fish, ranging from 10-20 different fish, including other sunfish, crappies, pumpkinseeds, and smallmouth bass.
Bluegill are important to aquatic communities for their superior ability to limit insect and crustacean populations.
Diet
The bluegill feeds off of the surface of the water, the mid waters, and the bottom, where it can be a serious competitor with other bottom feeding fish. Bluegills are carnivores, primarily eating invertebrates such as snails, worms, shrimp, aquatic insects, small crayfish, and zooplankton. They can also consume small fish such as minnows. Bluegills eat just about any little animal that will fit into their small mouths, especially aquatic (water) insects and terrestrial (land) insects that fall in the water. Young fry eat algae and zooplankton. Young bluegill eat worms and zooplankton, staying under cover while adults feed more in the open. As they grow larger, bluegills add more variety (i.e. small fish, aquatic insects and plant matter) to their diet.
(Look at video below to see bluegill feeding)
Conservation Status
Bluegill have no special status on the Federal or IUCN Conservation list.