Largemouth Bass inhabit vegetated, clear, freshwater lakes, ponds, swamps and backwaters of rivers and creeks (6). For optimum performance they require water between 10˚C- 32˚C, but can tolerate more extreme temperatures for short periods of time (6). They prefer shallow water, usually less than 20 feet, but need deeper waters to survive during the winter in their northern distribution. Largemouth bass require vegetation, rocks and submerged logs as cover to avoid detection by predators when young, and to hide and ambush prey as adults (4). They are benthopaelagic meaning they live and feed near the bottom as well as in midwaters or near the surface.

Large mouth bass reproduce in the spring when the water reaches around 17˚- 20˚C (5). The males construct crude nests where the females then lay their eggs. Females can lay anywhere between 2,000 and 145,000 eggs, with much of this variation depending on her size. Females have no further investment in their offspring, but the males guard the eggs until they hatch (3-4 days). After hatching, the fry are transparent and around 3mm in length. They remain in the nest until they have absorbed all of the yolk from the egg (6-7 days). The fry then rise from the nest, begin to school, turn pale green in color and begin feeding on zooplankton. The fry remain close to their father for at most 1 month after hatching (3). Female largemouth bass reach sexual maturity in around 2 years and male largemouth bass reach sexual maturity in around 3-4 months (3).  The average size of an adult largemouth bass is 40 cm long, and the maximum length recorded was 97.0 cm. The maximum weight recorded is 10.1 kg (22 pounds). Males typically grow slower than females, and the females can grow to double the size of the males. In the wild largemouth bass live to be 15 years on average. The maximum recorded age was 23 years. In captivity largemouth bass live much shorter lives, with the average age being 6 years and the longest recorded age being 11 years (2). 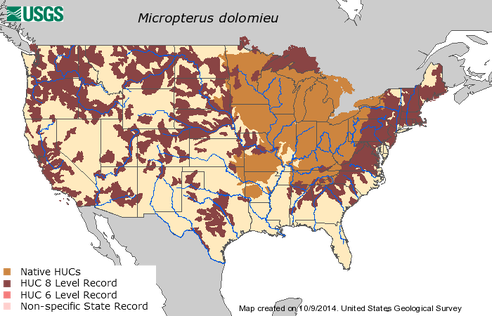