Taxonomy
Kingdom          Animalia
Phylum             Craniata
Class                 Actinopterygii
Order                Siluriformes
Family              Ictaluridae
Genus               Noturus
Species            flavus
Identifying Characteristics
Stonecats are slender, flat-headed catfish with an adipose fin. Typically, they grow to be four to eight inches in length and weigh about 0.2 to 1.1 lbs. Overall the stonecat is yellowish brown with a darker back and a light yellow or white underside .  Noturus flavus usually reaches the age of five or six. Stonecats also have a spine near their adipose fin that can sting a person like a wasp by releasing toxins.

Habitat
Stonecats live in freshwater environments such as large creeks and small rivers.  However, they can sometimes be found in rivers as big as the lower Mississippi.  Within these environments, they occupy rocky, fast moving riffle areas.  This animal is also nocturnal.  They will spend the day under rocks or woody structures, where it is dark, and will come out at night to feed in the shallows.  The stonecat is a bottom dwelling, opportunistic feeder.  Using its sensitive barbels, this fish searches the river bottom for food at night.  They have a diverse diet which can include aquatic insect larvae (such as mayflies), mollusks, minnows, fish eggs, isopods, amphipods, crayfish, plant material, worms, and chilopods.  Stonecats have also been known to occasionally feed on darters and minnows.
Life History
Stonecats are monogamous breeders.   Both females and males reach sexual maturity at age 3 and will begin to reproduce when waters are at 25°C (77°F) [10].  Females lay a cluster of eggs to the underside of flat stones or similar structures.  On average a female stonecat will lay about 300 eggs.  Clutches are mainly guarded by males, although females are thought to also play a role in guarding.  Males will continue to stay with the fry until they leave the nest.  Stonecats reproduce annually. 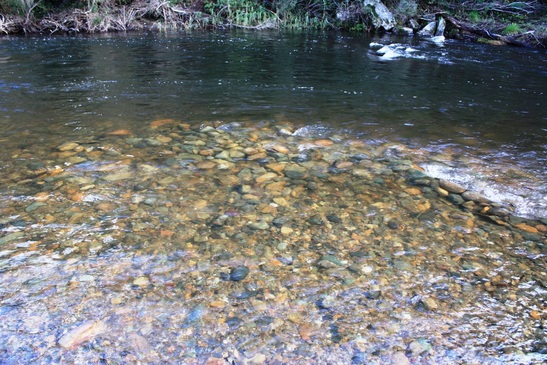 Geographic Range
Stonecats are found in drainages of the Mississippi River basin from Quebec to Alberta, southerly to northern Alabama and Mississippi, and westerly to northeastern Oklahoma. 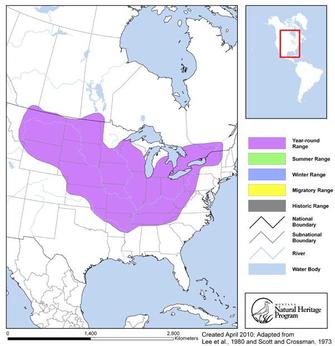 Conservation Status
The stonecat is not listed as endangered or threatened by the IUCN Red List, CITIES appendices, and the US Endangered Species Act.  However, as they are an fish that needs pristine waters to live in, they serve as a reminder that if we want them to keep thriving, we will need to keep our waters clean.

Ecosystem Importance
Stonecats serve as good indicators of water quality. They are not present in highly polluted or heavily silted areas.  It is interesting to note that no stonecats were found in Boneyard Creek this year (2014), indicating bad water quality.  Stonecats can also be good indicators of smallmouth bass populations.  It seems that if there are many stonecats present in an area, there are also usually many smallmouth bass populations.