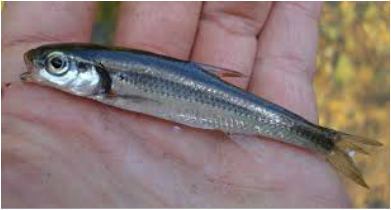 
Identifying Characteristics
Silvery fish with large eyes. Scales are more darkly colored at the front end which gives the appearance of a crescent. These fish also have 8-10 anal fin rays and a visible line that runs along their body. Their name refers to the occasional gold iridescence along its back. Males who are getting ready to mate may appear rosy on parts of their body.  The average size of this fish is 8.3 centimeters (3.27 inches) and the adult males are usually larger than females.  Adults are known to reach seizes of at least 20 cm (8 in) in length.
(see slideshow pictures at top of page)﻿﻿


Habitat
Striped shiners are mainly stream-dwelling fish and prefer to live in shallow rocky pools and backwater regions of streams and creeks. They can be found mainly in small to medium streams and rivers that are clear or somewhat turbid. They prefer to occupy the middle of the water column in these streams.

Life History
Reproduction takes place during late spring to summer. These fish are oviparous (egg-laying) and are considered nest spawners. This means that males will make a small pit in which they mate with females. Following mating, the fertilized eggs are abandoned.
﻿Geographic Range﻿
Besides Boneyard Creek in Champaign County, IL, these fish are located in many other regions of the United States. Striped shiners can be found in the Great Lakes and Mississippi River basins. 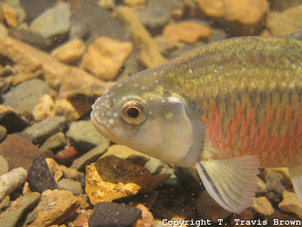 Diet
The striped shiner eats plants, insects, and detritus (waste debris in the water) and is eaten by larger fish. Because of this, the striped shiner plays an important role in the food web in its home ecosystem.


Conservation Status
These fish are very plentiful and are listed as "Least Concern" according to the International Union for the Conservation of Nature. Striped shiners are commonly used as bait fish by anglers.﻿