Identifying Characteristics
The eastern creek chubsucker is one of three species found in the family Catostomidae. It is generally small in size (3 - 6 in.) but has been found at lengths as great as 14.8 in. within the Mississippi River.
Juveniles
Dimorphism is present between juvenile and adult individuals. Juveniles have different coloration. Sexual dimorphism is not present between male and female individuals unless mating is initiated. (See Interesting Characteristics)

Juveniles exhibit a prominent, dark lateral stripe on either side. They are often mistaken for small minnows. This line eventually fades and the fish acquires a distinct golden upper half that fades to a milky white bottom.

Juvenile stage of E. oblongus lifestyle. Juvenile individual displays dark lateral line.
Adults
Adults of this species have differing characteristics based on the sex of the individual. Breeding males have a dark brown color on top that fades to pink-yellow under belly. Females have a lateral stripe that stays prominent after they mature. The eye of the fish is very small in comparison to body size. The fish also has an air bladder with two chambers and does not have a lateral line. 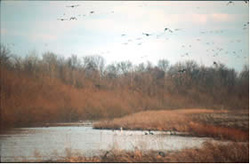 Adults and juveniles are found in different habitats. Juveniles can be found in head water rivulets. Adults tend to stay in slow moving spring pools and backwater areas rich in aquatic vegetation and invertebrate prey.


During the breeding season male and female adults congregate and spawn in areas upstream that have clean rubble or gravel beds.
Life History
Erimyzon oblongus forages on the bottom of backwater areas and flowing river systems across the
United States. Adult individuals tend be solitary until they are ready to spawn. Before spawning, fish will migrate upstream to areas with beds of gravel in swift moving waters. This species spawns in areas that cause it to compete for both space and resources with white suckers and northern hog suckers. Males modify gravel piles by using their snout and aggressively defend their territory. Females will copy the actions of the male to signify they are ready to begin mating. Interestingly, this species tends to partake in trio mating, which consists of a male on either side of one female.
Geographic Range
E. oblongus (creek chubsuckers) can primarily be found in creeks  of the eastern United States. It is prominent in many freshwater tributaries from the Atlantic slope streams found in Maine down to Atlamaha drainage in Georgia. They also populate creeks in the Gulf slope and eastward to the Escambia River drainage. Individual populations are found in Alabama, Texas, Mississippi, west Tennessee and Kentucky, and south of the Great Lakes throughout tributaries to lakes Michigan, Erie, and Ontario. E. oblongus populations cover a large portion of the creeks found in eastern and southern areas of Illinois.

Distribution of E. oblongus in Illinois is concentrated in creeks found in the eastern and southern areas of the state