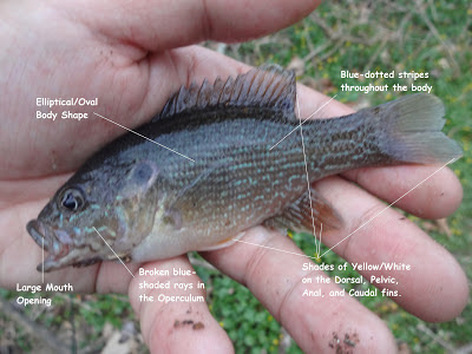 Taxonomy
Kingdom          Animalia
Phylum             Chordata
Class                 Actinopterygii
Order                Perciformes
Family              Centrachidae
Genus               Lepomis
﻿Species﻿            cyanellus
Identifying Characteristics
- The average length ranges from 3-7 inches
- usually weighs less than a pound
- flattened on its sides
- short rounded pectoral fins
- dorsal fin with around 10 spines
-homocercal tail fin (the two lobes of the tail appear to project out symmetrically)
-ctenoid scales (bony ridged with tiny spines on one side)
- dark spot on the base of the dorsal fin, the anal fins, and on the ear plate
-bluish green color on its back and sides with yellow on its scales and on the ventral side

Habitat
This species of sunfish prefers vegetated areas in lakes and ponds where they can hide around rocks and other object for protection. They can survive in muddy water and are poor indicators of water quality because of their ability to tolerate poor water conditions.
Life History
Green sunfish spawn in the summer. The males create nests at the bottom of shallow waters and defend them against other males with visual displays of aggression, using force when necessary. They usually build the nests near areas with shelter in the form of rocks or logs to make them easier to guard. Though females can be attracted with the construction of a nest itself, males must sometimes make extra efforts such as grunting and showing her to the nest where they continue to swim around each other until she is satisfied. The female will then put her eggs in the nest and leave them with the male who will guard the eggs until they hatch. After the eggs hatch, the offspring will linger for a few days until they go off to find food on their own while the male often seeks to attract another female to repeat the cycle. Because the nests of male Green sunfish are often close to nests of different species of sunfish, females may put their eggs into the nest of a male from a different resulting in hybrid offspring. Because of these occurrences, it can often be hard to identify one species of sunfish from another. 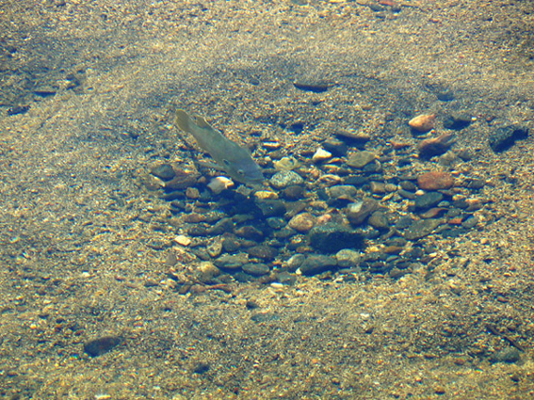 A Green sunfish guarding its nest

Native to North America, the Green sunfish can be found from the Hudson Bay Basin in Canada to northern Mexico. and in several bodies of water in the continental U.S. It was introduced into several countries in Africa, Asia, and Europe where some of the populations have become fully established. 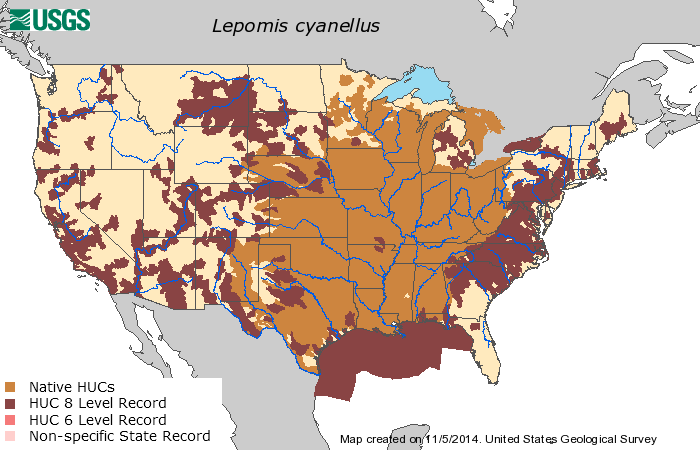 Diet
Aquatic insects and insects that fall into the water are some of the things the Green sunfish like to eat. They also eat crayfish, snails, even some smaller fish.