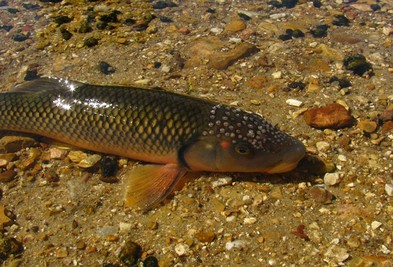 Identifying Characteristics
N. biguttatus is a member of the minnow family. Adults have a brown back with silvery sides and a creamy belly. They have a dark lateral stripe that ends in a spot that may be absent in adults but is prominent in juveniles. During the breeding season males have a red dot behind their eyes and develop white tubercles on the top of their head. Adults grow to between 5-7 inches with a max size of around 10 inches. 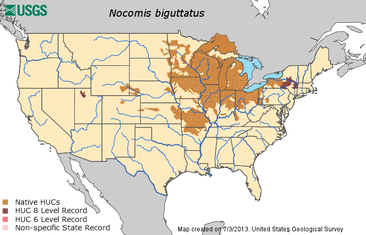 Life History
Breeding occurs late May to early June. Males build a cup shaped depression that they build up with pebbles that can be as large as 1-3 feet across and 6-8 inches high.  Eggs and sperm are deposited in depressions in the nests and covered with gravel.  Males defend the nest mounds from other N. biguttatus males but not other species.  Other species take advantage of this defense and spawn in the nest mounds.

Geographic Range
This species can be found in the Mississippi River basin, Red River drainage, Ohio River and lower Kentucky River systems. They can be found from New York west into the Dakotas with isolated populations in the Platte and Colorado River Systems, and north from Manitoba and south into Kentucky.
﻿

Diet
They forage primarily on aquatic invertebrates and terrestrial insects that fall into the water. This can include insect larvae and crustaceans. Small amounts of plant or algae material may be ingested during foraging but probably do not contribute much to their diet. 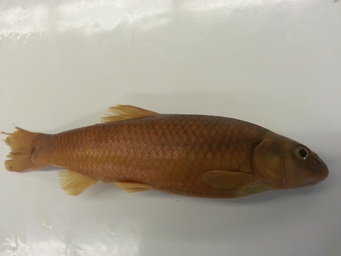